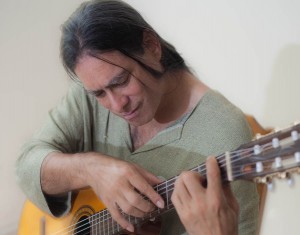 I’ve wanted to write about Larry Wilmon Williams for some time now…but found it very overwhelming to write Anything…since this special man and his music both reside in my house.
Larry’s musical experience, which is at once joyous and mischevious, makes my heart beat in a new way. This music has a familiar ring yet with so many twists and influences, it might as well be a whole new sound. Jazz, Folk and Classical genres make up a sandbox of ideas and voices that are unusual and innovative. Larry is a true sound improviser.
For 36 years, Larry Williams made his living playing the trumpet…with flugelhorn, EWI, percussion and even vocals running in the background. (Especially the guitar since it was always used as his principal composing tool). Currently, Larry has seven releases to his credit… as a featured artist and leader.
His eighth and newest effort, “Tales of Wilmon” (2010), is dedicated to his father, the late James Wilmon Williams. It showcases Larry on guitar. Now this was a great surprise to me…I did not know he even played guitar, let alone play it so well! Oh…that’s not all…you will hear percussion and vocals all over this project… Guess who?
Defying categorization, this CD is a sweeping American journey…emotional, provocative, and rich in sound textures. Featuring Larry’s original compositions and arrangements, “Tales of Wilmon” merges subtle rhythmic invention with the nervous brilliance of pure jazz and the intransigence of classical modernism.
About the Band… Wilmon Will, consisting of violin, clarinet/alto recorder, seven string bass, percussion, and Larry on guitar and vocals, covers the dynamic themes and songs á la Wilmon. What has developed is an undeniably powerful chemistry among the musicians as they bring the Wilmon idea to life.
Try to imagine…having flashing arppegios to the wit of a clarinet—violin—guitar trio…add to it…a stompin’ yet imaginative rhythm section…a tremendously unique atmosphere…a playful yet unexpected approach, Copelanesque in spirit…with a certain restlessness. All this is my idea of Wilmon Will!
BTW… “Tales of Wilmon” will be the LAST of Larry’s projects on which he blows his own horn! Embarking on the next phase of his career, placing guitar in the forefront will be a priority. I think having a new musical voice and direction must be so exhilarating for him…but he handles it with the greatest of ease.
Amid all this musical intensity, a halo of trills and a myriad of textures, one can easily experience Larry’s commitment to innovation and excellence. That is the message of his on-going work. Watch… and listen to what comes next. Larry is totally consumed by the Art of making music. His next CD will be solo guitar and vocals…can lyrics be next? Stay tuned.

“Tales of Wilmon,” “The Bridge” and “A Time to Play” are available on CD Baby.