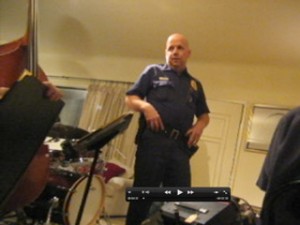 It just happened that this year… my Birthday fell on a Wednesday… Monktet Rehearsal Night. I thought it would be great fun to celebrate with my band and a few friends. Since I usually spoil my musicians by setting out strawberries, assorted fresh fruits and cookies or brownies, plus coffee and Newcastle… the basis of a party was already there… all set, ready to go.

I had asked my nephew, Greg Bendoni and his friend Stan Ausmas… the week before… if they could bring their video cameras since I wanted to prepare a demo. Just before Rehearsal time, my partner and Best Friend, Larry Williams set up the band (a nonet) in the Living Room, then asked me if I wanted him to pick up last minute goodies at the market. He came home with a bunch of bags and put everything away. He’s such a good Guy! 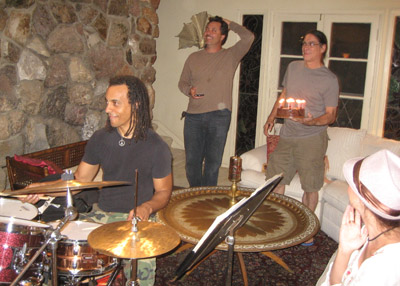 After all the Hugs, Kisses and Birthday Wishes… the Rehearsal began… pretty much on time. Maybe because they were in a celebratin’ mood, the Monktet sounded even more energetic than usual. It was almost “Break Time” and Mike Nelson was in the middle of a fabulous Alto solo from “Joy Bop” (the title tune from our latest CD) when someone rang the Doorbell… Pounded on the door… and Yelled… “POLICE!”…… OMG!

It was a COP… a balding, middle aged guy… with a badge, gun and attitude… Taking immediate control. He said our neighbors had complained and we would have to “shut it down”. I explained that in 30 plus years of rehearsing various bands at the House, no one has complained. He answered that the previous watch sergeant had been a former student of John’s and would just toss the complaints… but they’ve got a “new guy” who plays by the book” and we would have to stop. We were all shocked… especially me. I explained… “But… But… It’s my Birthday!”… He continued talking… Then stopped dead: “Did you hear what she said? It’s Joy’s Birthday!!!” He then broke into the “Happy Birthday” song! A shocked bunch of people joined in. He then proceeded to dance (Bump and Grind style and sang a funny song with special lyrics. His rear was almost in my face (I was sitting down)… I was afraid he was going to strip! He didn’t, thankfully. He was just the opposite of Buff. 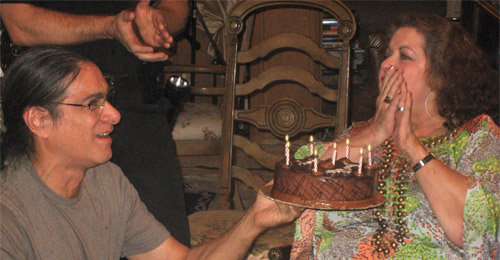 Now remember… everything was being recorded for posterity by three cameras.Greg Dahl has added his for good measure!

Suddenly… everyone stopped and started to “ooooo”…right behind me was the most wonderful surprise… I turned around and Larry presented me with my favorite chocolate mousse cake all a-sizzle with a zillion lighted birthday candles!!! It was “Happy Birthday “all over again. Of course, I burst into tears of Joy.

This birthday was the best and most memorable… so much love plus giggles went into the planning. Larry’s partner in crime was my best bud, Byron Fry. As fellow guitarists do, they email and talk on the phone… a lot… about music, techniques, pedals, equipment and other whatevers peculiar to their instrument… so… in the week before my Birthday, I didn’t think that there was anything unusual about the many conversations between such Good Friends. Hah!… Little did I know. They were so afraid that I would figure Something was going on. Even up to the very last minute, Larry couldn’t believe everything was going “like clockwork”. No one else knew… except a few at the very last moment!

Unfortunately, Byron was not able to join us… He was driving to Oregon for some gigs and a recording session… but he certainly attended my surprise Birthday Party in Spirit… which was all over the place! 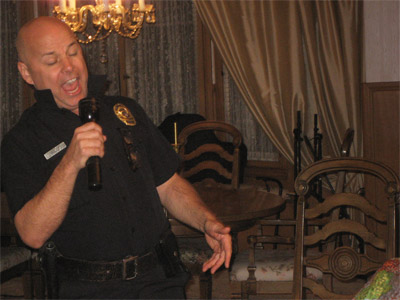 And for Larry… what can I say? How’d he do it? How’d he hide the cake? How did I not know anything…? I totally bought the cop’s story (Byron’s Script)… as did everyone else.

My Best Birthday Gift has to be the Love and friendship that surrounds me. With such a fantastic start of this New Birthday Year… I am looking forward to a great one!